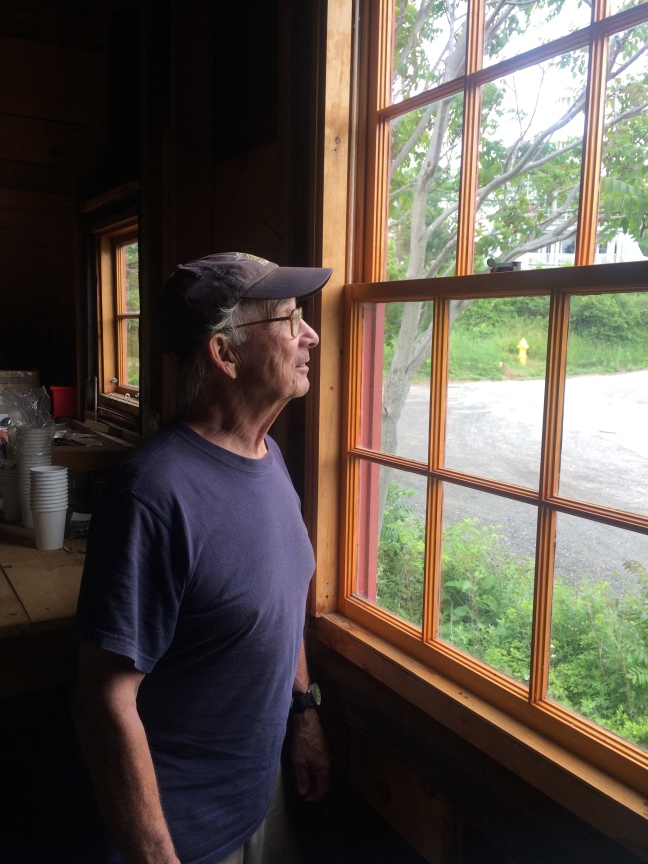 Brainy accomplishment trails Lanesville resident Damon Cummings like a wake behind a fast moving skiff.  He studied at MIT in the 1950’s, delaying a cherished career in naval architecture because physics at that time was “too fun!”  He went on to study in Delft, The Netherlands with legendary professor of naval architecture Laurens Troost.  Cummings learned Dutch so that he could be a better friend to his classmates.  He finished his academic career with a doctorate in naval architecture from MIT, after which he worked on destroyers and submarines as a specialist in sound and vibrations.   Many around Gloucester know him as the man who runs the Club Sailing Team at Gloucester High School.  He also officiates the Gloucester Dory Races.  While at school in the Netherlands, he raced sail boats along the European coastline, and once sailed a 35’ sloop from Bermuda to Halifax.

This is the man who, with the rest of the quietly stellar Fish Shack crew, pounded nails into the renovating Fish Shack for two years of Saturdays  This is the taker of minutes for the endless Fish Shack Building Committee meetings.

Cummings’ story is nautically and scientifically extraordinary, but I’ll make a full stop here and quote the Wikipedia post to which Cummings directed me about one quarter of the way into our interview:

USS Damon M. Cummings (DE-643) was a Buckley-class destroyer escort of the United States Navy, named in honor of Lieutenant Commander Damon M. Cummings (1910–42), who was posthumously awarded the Navy Cross for his heroism on board USS San Francisco (CA-38) during the Naval Battle of Guadalcanal.

Clearing San Francisco on 8 September 1944 Damon M. Cummings escorted a convoy to Eniwetok and then sailed on to Port Purvis, Florida Island, arriving on 15 October. She served in the Solomons until 6 November, and on 19 November she arrived at Funafuti, Ellice Islands, from which she patrolled shipping lanes until 2 January 1945.

She escorted convoys in the battle of Okinawa, and remained there on patrol until the end of the war.

Many Gloucester residents know the tragedy that lies between the lines of this entry, that the Lanesville retired naval architect and pounder of Fish Shack nails was a first grader at the Punahou School when the Japanese attacked Pearl Harbor, and that the above Destroyer’s namesake was the Lanesville Cumming’s father.

There is so much to imagine here – how a young boy manages what was first the “excitement” of war; how his father is soon after heroically lost in a famous naval battle, how his mother almost simultaneously gave birth to her second child, and how the six-year-old Cummings absorbed the loss of his father and courage of his mother to go on.  How his father was then reincarnated as a navy destroyer, going on to conduct significant war-time missions

Who knew such stories live in the imagination of a man who helped build the Lane’s Cove Fish Shack?

When I asked Cummings what were his favorite and least favorite moments about working on the Fish Shack, he said he didn’t know where to start with the favorites, but mostly it was working with the people.  His least favorite, he said, of course, was losing Paul.

From his father’s loss in the Pacific Ocean, to an early determination to build sea-traveling vessels as a naval architect, to teaching high-schoolers to sail, Cummings’ heart seems filled with sea water.   He and I talked about his civic involvement over the years, saving sections of Gloucester’s waterfront from poor development.  The proposed development off of Rt. 128 came up, to which he answered, “If it’s not on the water I just can’t work up the enthusiasm to do something about it.”

Luckily, the Fish Shack’s northwest feet stand in six feet of seawater at a high tide.