During a time of political and racial division in America, where we’re divided into them vs. us, I’d like to acknowledge the community effort to restore the Little Shack at Lane’s Cove. Friends and neighbors, in cooperation with Gloucester City Officials, came together to restore the Little Shack. Those that participated came from different socioeconomic backgrounds with varying political views. Some were long time “Covers” others were relatively new to the Lanesville area. Regardless of our differences, we didn’t view ourselves as different or had a them vs. us mind set. We simply and brilliantly thought of ourselves as a group of like minded individuals doing something positive for the community. We had the mutual goals of historic preservation for future generations, respecting and recognizing past generations and adding to the beauty of Lane’s Cove.

Restoring a falling down fish shack isn’t an extraordinary accomplishment. We didn’t save any lives, we didn’t feed the poor, we didn’t receive national or local recognition for our effort. We did however, improve the backdrop of the Cove for current and future residents of Lanesville and visitors to the Cove. We also had a healthy and fun experience that brought us together as a community. An experience that strengthens us as a community and as individuals to better equip us agenst divisive influences.

Thank you to those of you that participated in this effort!

Dr. Phil Goldsmith, Director on the board of Lanes Cove Historical Association passed away on December 13, 2019. Dr. Phil contributed much to the Cape Ann community. In addition to his work with the LCHA he volunteered for the Thacher Island Association, at the Shalin liu performance center and other local organizations.

Phil was a kind, friendly gentleman loved and respected by those that had the pleasurer of knowing him. He had a wonderful sense of humor, a giving heart and contributed greatly to his community.

Rest in piece my friend. You will be greatly missed. 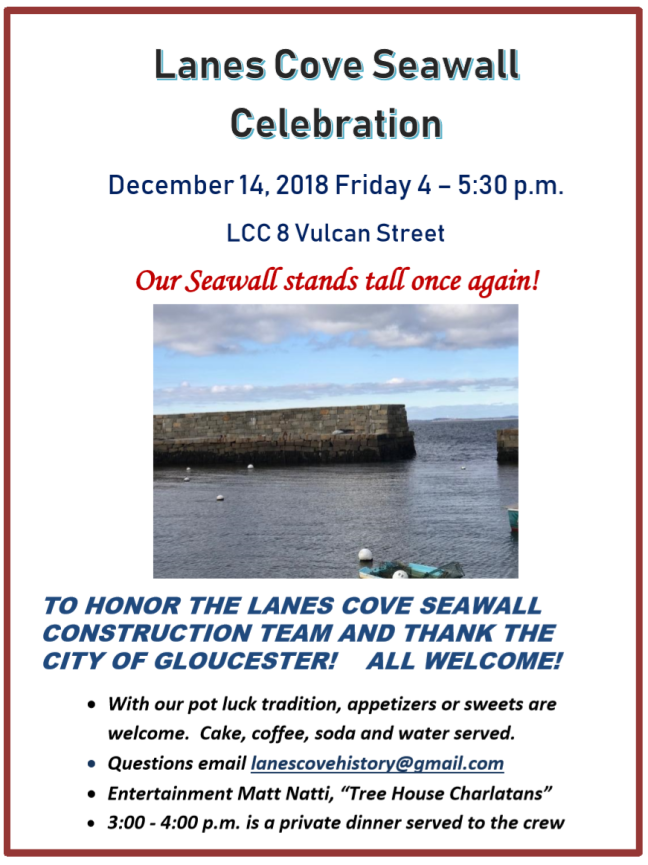 All summer the community watched as granite blocks were meticulously gathered around a concrete core to form the new sea wall at Lanes Cove. Amazingly this work was done with large excavating equipment that, to the average person would not be capable of producing such a precisely laid wall.

On December 14 a thank you lunch and reception were held to thank the Crew who did such a wonderful job at restoring the see wall.  The community came togather to prepare a lobster and chowder lunch, followed by a public reception, music and community socializing. The celebration was a great success and very much appreciated by the crew and all those that turned out to thank them for their work.

In addition to the crew, the community recognizes and thanks Mike Hale (Director of Public Works)  for his drive to make this project a reality. It’s very likely that the restoration project would not have happened without his leadership.

The Lanesville community also deserves recognition for caring about their community and those that help preserve it. Where else dose a community get together to recognize those that make public works efforts possible? Just another example as to why Lanesville is a unique, involved and captivating community!